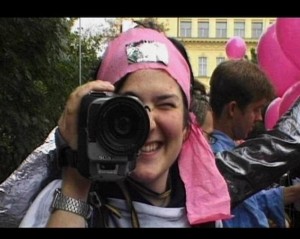 Shooting in Prague for Undercurrents

Revolting in Prague (26mins 23sec, 2000). Riots, pink fairies, corporate men and money. An insight into the IMF/World Bank summit which activists shut down in 2000. 50,000 people traveled to Prague to stop the money men destroying our planet.

This is a video produced by Undercurrents (directed by Paul O’Connor), the video activist production company where I worked in 2000-2001, of the IMF / World Bank protests in Prague, 2000. I was a camera operator for the event, following the pink and silver march, with my camera buddy, Flo.

It was quite an experience, being part of a huge mass of people from all over Europe and the world, converging to protest the policies of these institutions who put economic restructuring ahead of people and the environment, demanding that governments privatise basic services, build infrastructure such as dams without regard for environmental and social destruction and more in exchange for their development loans. Undercurrents was part of the independent media who came together around the prague.indymedia.org project to tell a broader story of the protest than the narrow, conflict-based news coverage in the mainstream press.