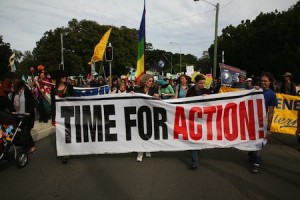 It was also a convergence for some young folk who were covering the event independent media style. I was helping out organising the media space and doing a spot of filming/editing too.

Check out this video on EngageMedia of activists locked on to the coal trains on Sunday 13th July:

You can find more coverage of the camp and associated actions here on EngageMedia.