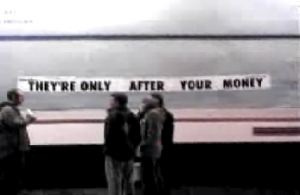 Still from Subvertising at the OK Cafe

Subvertising at the OK Cafe (4 mins 53 sec, 2002) is a short D.I.Y. video about subvertising and stencilling, which shows you how to create stencils from ordinary materials you can find at home.

I made this video about a subvertising and stencil graffiti workshop at the OK Cafe in Manchester in 2002. The OK Cafe was the name of an ongoing squatted social centre that moved from squat to squat over the years, run by different collectives. Workshops, parties and meetings etc. were held in this incarnation of the OK Cafe – an old pub near Deansgate.

Memorably, at one squat party (scene of my first ever dj set) there was only one toilet that worked upstairs, so another was constucted using an old-style red phonebooth and a bucket. Partygoers had to pop into the phonebooth just off the dancefloor to relieve themselves during the night. The party was really fun, my friend Alex pulled out a drumkit into the middle of the dancefloor for my set and drummed along to the tunes (a mixture of punk, riot grrl, electroclash and rnb as I recall). It was an all-girl d.j. night, my friend Hazel also played an amazing set the highlight of which was the crowd going wild to Joan Baez’s “The Night They Drove Old Dixie Down” and Jo Banana played a steamy set of northern soul.

Anyways, I digress, the workshop was by a couple of excellent local graphic and stencil artists who were also responsible for great political posters and whatnot. This video was made for BeyondTV, the video distro site I was working on at the time, played in the Melbourne Underground Film Festival in 2003.

For now you can view the video here.