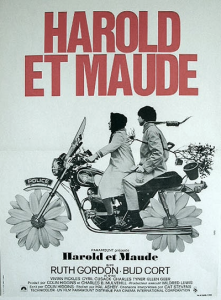 Catharsis is a point in the narrative of a film when an emotional realisation or internal transformation occurs, experienced by the audience, and often felt via identification with the simultaneous cathartic renewal of the protagonist. Not to be confused with the crisis, when the forces of antagonism reach their dramatic pinnacle, it is rather the release of these traumatic tensions within a film, as evidenced below in the examples of Hal Hartley’s Trust (1990), Hal Ashby’s Harold and Maude (1971) and Tim Burton’s Edward Scissorhands (1990).

Catharsis has its origins in Greek Tragedy, and is defined by Aristotle in his seminal work of dramatic and literary theory, Poetics or The Art of Poetry (c. 335 BCE). The term is derived from the Ancient Greek καθαίρειν – to purge, cleanse or purify (which Aristotle used as a metaphor, as it was prior to this a medical term for menstruation). Aristotle believed that tragedy could have a corrective effect on the audience – who may bring sadness or ill-feeling towards others from their own lives to the theatre, but through the exercising of these emotions, re-experiencing fear and pity via the story, may also find that dramatic catharsis purges them of negative feelings. This theory, and the Poetics in general, was counter to Plato’s assertion that poetry encouraged men towards hysterics and uncontrolled emotion.

Sophocles’ defining work of tragedy, Antigone (c. 442 BCE), is concerned with a main character (Kreon) who is neither purely good nor evil, who through his well-intentioned but short-sighted actions brings tragedy upon himself and his family. By executing Antigone, his niece, he inspires in the audience both fear and pity for the characters who suffer as a result – his wife and son who commit suicide and Antigone herself, whose only crime has been to give her brother a decent burial (which Kreon has denied him as an enemy of the state). These tragic events bring about a restoration of the social balance, creating a feeling of relief and transformational resolution to mitigate the sadness experienced by the audience. Another example of catharsis is to be found in Shakespeare’s Hamlet, where the drama created by Hamlet’s inability to enact revenge for his father’s murder, and the ensuing tragic deaths of himself and many others, is released by his eventual killing of Claudius, his usurping uncle, once again re-establishing the social order.

In American director Hal Hartley’s second, and arguably his best, feature film Trust (1990), the plot concerns Maria Coughlin, an intelligent yet ignorant, materialistic and naïve (to the point where she pronounces this word “naive”) high-school drop-out and Matthew Slaughter, a misanthropic, idealistic and highly intellectual electronics repairman. These two misfits are united by fate, just as Maria tells her father of her pregnancy (to an uncaring and narcissistic football-playing boyfriend), upon which news Maria’s father dies of a heart-attack. Both desperately lonely, they face dealing with both Maria’s pregnancy and feelings of guilt at her father’s death, and Matthew’s disaffection, linked to intense bullying by his father. Amidst the chaos of their conniving and unloving families, together Matthew and Maria define the love that neither of them have ever really found (as the comically simple formula “trust, admiration and respect equal love”. The tragedy of their cerebral love-affair is that Matthew, in his attempt to do the right thing (get his job back at the factory, a job that drives him to depression and extreme acts of aggression, in order to support Maria, himself and her baby), becomes insensitive to Maria and her real feelings, and to his own true self, losing them both on a blind path towards social conformity (Maria – “Your job is making you boring and mean”, Matthew – “My job is making me a respectable member of society”).

The crisis of the film occurs as Matthew attempts to blow himself up with a grenade, taking the computer factory with him, and Maria (thinking Matthew has not only lost his way, but cheated on her with her treacherous sister) has an abortion – scratching all plans for a happy future together. Matthew is arrested, and catharsis occurs as Maria locks eyes with him as he is driven away in the police car, exchanging knowledge of their transformation in one long look. They have lost the only love they have ever had, but at least they have learned what it means, and how essential being true to oneself is to keeping it.

In Hal Ashby’s Harold and Maude (1971), Harold, another love-starved misanthrope, barely out of his teens and spoiled rotten by his mother with everything but real affection, stages theatrical suicide attempts to try to get some kind of reaction. Harold’s idea of fun is to go to funerals (his everyday habit of dress allows him to blend in easily), which is where he meets Maude, his antithesis. Maude is 79 years old, and embraces life so heartily she bruises its ribs. They are opposites of their stereotypes – Harold is cynical, tired and despondent whereas Maude is vivacious, cheeky and unconcerned with consequences. Their love affair, bridging such an age gap, challenges societal convention and horrifies Harold’s family, yet is deeply transformational and educational for both Harold and Maude. Harold learns to love life, and Maude learns to love death – a necessity, she has decided, given the inevitability of her fading physical self. Maude knows that death is a natural part of life, unless it is the terrifying mechanistic death of war and genocide, which she knows well as a Holocaust survivor (this is a satirically anti-war film, released during the Vietnam war).

Harold and Maude’s intensely moving catharsis occurs when Harold, proposing marriage on Maude’s 80th birthday, realises she has taken a fatal overdose of pills, and that this is really her goodbye party. Harold rails against this terrifying prospect, taking her to hospital in an ambulance, refusing to let her go the way she wishes to be. Finally he has no choice, she dies. Harold drives his car off a cliff, as Ashby cleverly fools the audience into believing Harold has really committed suicide this time. The film ends as we see Harold has jumped out of the car at the last moment. He plays the banjo, finally able to celebrate that both life and death are part of nature, and are to be embraced. Both fear and pity (for Harold and Maude) are evoked to great dramatic effect in this conclusion of the film, yet the natural order of life is restored and we let these feelings go again with a great sense of release and edification, as we too feel ready to wholly celebrate life and death, essential to a full experience of our own humanity.

Tim Burton’s Edward Scissorhands (1990) is a clear favourite of mine amongst his films, which has much to do with its intelligent and deeply emotional exploration of the extremes of man’s (or monster’s) vulnerability and kindness on the one hand, and selfishness, small-mindedness and fear of the “other” on the other hand. Its quite devastating catharsis plays a large part in it being the kind of tragic film that you want to see again and again, rather than feel too depressed about to revisit. It is also yet another film about an outsider (which says something more about my taste in narratives). Edward is an artificial boy, created by an inventor who died before he could replace the scissors he made for hands with real ones. He lives lonely in an empty mansion on the hill until an Avon lady, Peg, from the suburb below takes him under her wing, inviting him to live with her family. He gains grudging acceptance by the community for his talents at hedge and hair trimming, falling in love with Peg’s daughter Kim in the process, until two scheming members of the community implicate the innocent Edward in a theft and falsely accuse him of rape. The suburb turns against him and Peg’s family. When Edward accidentally cuts Kim and her brother Kevin with his hands, he flees to the mansion on the hill, pursued by an angry mob. Edward saves Kim from her attacking boyfriend Jim, killing him in the process. Kim tells the mob both Jim and Edward are dead, protecting Edward from their wrath. Catharsis occurs with the image of “snow” created by Edward’s annual carving of ice sculptures for his beloved Kim, falling down on the suburb every winter (despite the fact that it is Southern California, and never snows). It falls on Edward’s memory of Kim as the young woman he fell in love with. Society is once again in balance, as the boy who is too gentle and innocent for human company (despite his paradoxical built-in brutality, thanks to his scissor-hands) is exiled forever.