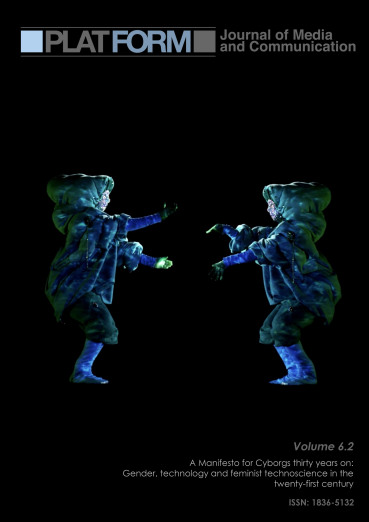 Published in Platform Journal of Media and Communications Vol. 6.2 – A manifesto for cyborgs thirty years on: Gender, technology and feminist-technoscience in the twenty-first century, edited by Thao Phan.

From Thao’s introduction to the issue:

It has been thirty years since Donna Haraway’s iconic essay A Manifesto for Cyborgs: Science, Technology and Socialist-Feminism in the 1980s (hereafter Manifesto) was first published. Broadly acknowledged as the text that first introduced the cyborg into feminist theory, the Manifesto has had an influence and impact on feminism and other scholarship far exceeding its original contexts and intentions… Anna  Helme’s  creative/essay  contribution  is  a  fusion  of  queer  politics  in  artistic  practice.  A contribution that has been lovingly put forward in two parts: the first is Helme’s short film MyMy (2014), a  consciously  queered  science fiction  narrative  produced  with  an  aesthetic  of  mystic  technology;  and  the second is an intimate essay on identity, artistic process and queer politics. As a film, MyMy is a fantastic exploration  of  the  aesthetics  of  alterity. Written  and  produced  with  the  Manifesto  in  mind, MyMy similarly  reimagines  tropes  of  technoscience  outside  of  the  language  of  cold  rationality  and  humanist progress. When  tropes  such  as  these  are  blended  with  human flesh  in  embodied  visions  of  cyborgs—for instance,  James  Cameron’s The  Terminator  (1984),  or  David  Cronenberg’s  Videodrome  (1983)  or Existenz (1999)—they become necessarily abject. They are dehumanising, monstrous and violent. MyMy, however,  posits  an  alternate  cyborg  fantasy,  a  fantasy  which  is  intimate,  affectionate,  and  that  eschews essentialist tropes of gender and master/slave dialectics of technology.