The Nextwave Festival 2004 commissioned myself and performer/musician/animator/artist Louise Terry to create Electric Dreams, a colourful genre-hopping hybrid theatre / audiovisual performance work. I worked collaboratively as a co-director, writer and performer, as we formed the Artesian AV Arkestra with Paul Bourke and Michael Prior. The show became an hour-long mix of live physical performance, interactive video performance using a custom-built midi Theremin to control Vjamm2 AV software, and musical performance – live soundtrack to sample-based video montages. We based our story on the life of Leon Theremin, inventor of the first electronic instrument, and ended up performing a kind of wacky cinematic essay about the clash of communism and capitalism, and the relationship of economics and power to art.

We also performed a version of this show at the Melbourne Underground Film Festival art spin-off festival Teknikunst in 2005 at the Incinerator Arts Complex. It was an ambitious project, for a small team, that I worked solidly on for 18 months – that included writing, performing, sampling, editing, animating, making music, getting our own midi-Theremin built to specification and working with my collaborators to direct staging, sound and lighting design. From our poster (design by Lachlan Conn):

Electric Dreams is a colourful genre-hopping audiovisual zine performed by the Artesian AV Arkestra – a small experimental band bent on exploring the potential of performance iwth live video. In Electric Dreams, The Arkestra utilises a custom-designed midi-theremin to sample their way through the 20th Century, examining culture, politics, propaganda and its effects on the artist.

We follow the story of a troupe of young Russian performers after the Revolution, who escape to the West to pursue artistic freedom and celebrity. After finding some success amid the excesses of Hollywood, the patina beings to darken on the surface of their American Dream – they are kidnapped and taken back to Russia by the KGB who consider them to be a thorn in the side of the Soviet regime.

In a bunker deep under the Kremlin, they are cryogenically-frozen and forced to act as human guinea-pigs in an experiment to use their brains as an organic-electric media filter and intercept capitalist propaganda embedded in Western mass meda. This newly designed machine modulates radio and television frequences, using a theremin (the first electronic instrument ever made) to inject these sine-wave oscillations directly into their temporal lobes, in order to track subversive Western pop-cultural patterns and trends.

Live-action and video collides onscreen with cut’n’paste animated collage, glitching out with interference bouncing around our media-saturated globe. Our sonic palette ranges from the pre-industrial, to sinister snippets from the golden age of the musical – synthesised into 80s electronica.

A review from The Program:

Electric Dreams – part of the Next Wave program – is an eclectic audio-visual adventure, spanning the darkest and lightest moments of 20th Century culture.Part technological experiment, part avant guard performance, Electric Dreams is a unique combination of theatre, vj-ing and mixed-media performance presented by the Artesian AV Arkestra. Inspired by the theremin – an early instrument that responds to motion – Electric Dreams takes a thoroughly modern approach to the classic themes of politics, propaganda and freedom of expression.

A troupe of three young Russian performers (played by Louise Terry, Anna Helme and Paul Bourke) escape to the West in pursuit of artistic freedom. The heady nature of this ‘new world’ is conveyed via a mish-mash of historical footage triggered live using Vjamm.

The librated Russians are caught up in a whirlwind of success. Images representing the roaring twenties, the Hollywood golden age and the American Dream flicker across a transparent screen, incorporating the live actors into the carefully choreographed video and collage.

At their peak, the performers are kidnapped by the KGB and whisked back to Russia. Deemed a threat to Mother Russia, they are forced to serve as human guineapigs, monitoring the rise of Western popular culture in order to subvert it. As organic media filters, their journey culminates at the peak of ‘cultural’ excess – the 1984 Eurovision Song Contest.

Electric Dreams is a sensory treat. Samples of music, images and video bombard the audience’s sense. Opening with dreary visuals of Russia’s industrial age, the performance builds up pace and vigour as it cuts a path through 20th Century cultural and historical highlights.

Bourke, Helme and Terry give wonderful performances, combing classic silent film techniques with present-day satire. Bourke looks like he just walked off the set of Nosferatu, Terry is a Hollywood glamour-puss and Helme channels the sweet sadness of Charlie Chaplin.

Without any actual speaking roles, the performance relies considerably on the expressions and motion of the actors. This is complimented to great effect by still close-ups, photographs and video of Bourke, Helme and Terry projected onto a large screen.

As the performance moves towards the kitsch of the eighties, its tone relaxes considerably. Possibly put off by the early dark visual of industrial Russia, the audience responds more favourably to the closing scene – Eurovision in all its 80s glory! The Artesian AV Arkestra does a brilliant version of Human League’s Electric Dreams, all cut-up and sampled in true VJamm style.

My only disappointment with Electric Dreams was the fact the complex technical aspects of the project (ie, the theremin triggering and live vj-ing) weren’t more evident. It would’ve been wonderful to have the “behind the scenes” technology more visibly integrated into the performance. The Artesian AV Arkestra are pioneering this form of hybrid theatre, and I anticipate seeing impressive things from them in the near future!” 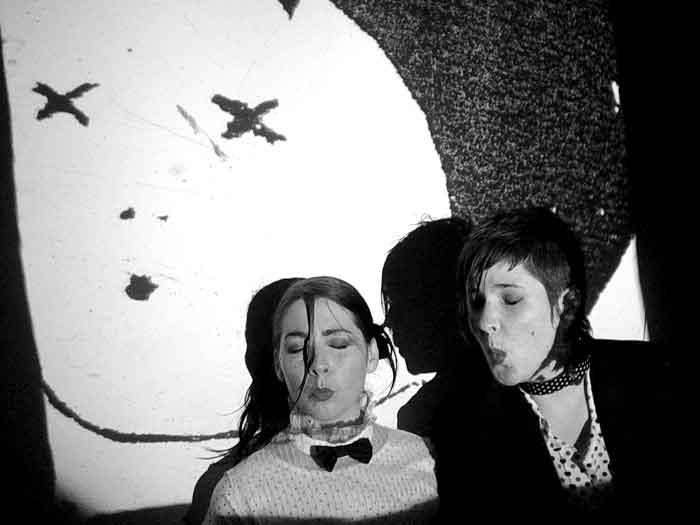 From our promo material during the theatre-making process:

“We’re a big-band cos we got big-ideas. Live-action video collides onscreen with a comix feel, projecting customised slides and hand-drawn stop animation cut’n’pastried with the latest in digital compositing with Flash/After Effects etc.

All of this action is assisted by the newly designed SpaceMaker, a spatial audio and video mixer, custom designed and crafted locally in Melbourne. 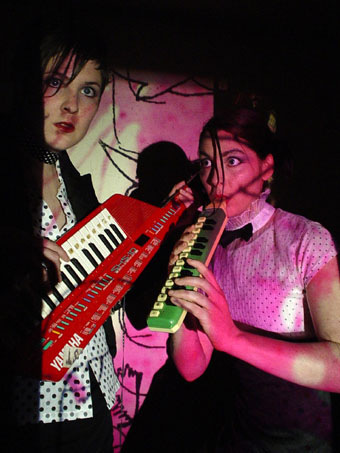 instrument will be accompanied by a cacophony of out-dated musical instruments and newly modified sound toys.

We’re hiding our laptops under the desk and puttin’ on our tie’n’tails to give you a sensory spectacle through a landscape of (s)punky audiovisual oddities.

Paul Bourke as Vladimir Crow visits this production as a ghost in the machine, embodying the lonely spirit of a cowboy on the plains, Charlie Chaplin caught in the cogs of post-modernity.