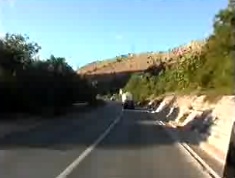 Mostar Trek (10mins, 2001) is an experimental/documentary of the PirateTV CAN-DU tour of the former Yugoslavia in 2001, produced for the Mixmasters series (Addictive TV) screened on ITV and internationally.

Mostar Trek features editing and footage from myself, Camilla Tornøe and Mark Scarratt from Headspace / Brighton ART. Music is by Matt Black of Coldcut. Perhaps because of this, or due to inheriting an editing style from freeform party vj-ing, it’s a bit of a mish-mash, but serves as documentation for our amazing 6-week trip.

We toured around with two trucks, a coach and an airstream caravan, bringing with us our own custom designed PA (check the rocket-style bass bins!), a big waterproof stage and 6 projection screens – along with the greatest number of video-mixers, laptops, cameras and other AV/VJ devices I have ever seen in one set-up.

During our tour we played at a basketball court in Lljubliana, a beach in Pula, a white marble palace in Dubrovnik, a cave in Mostar, a fortress in Belgrade, another basketball court in Banja Luca, a squat somewhere I have forgotten, and a university in Zagreb, and visited all kinds of amazing radio stations and art spaces. When I get a chance I’ll write more about our journey.