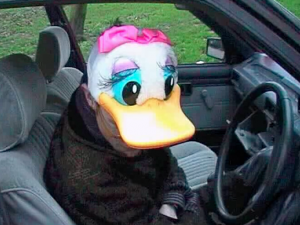 Still from promo for NATO

This is one from the archives. A 35 second promo for the Northern Arts Tactical Offensive, to be used at screenings and events (obviously, or quacking for details may be somewhat less effective). NATO was a collective in Manchester who did various subversive and situationist-influenced performances and other artworks, including the March for Capitalism and a spoof tourist guide to Manchester for the Commonwealth Games (2002), directing tourists to the alternative Blitz Festival of international grassroots underground culture, in the form exhibitions, street theatre, outdoor music, film nights and presentations.

NATO is a Manchester-based grassroots art collective. Our work as a collective, or through collaborative projects, aims to bring grassroots and underground art dealing with current social and environmental issues out of the confines of its more typical contexts, exposing it to a more diverse and mainstream audience.

We believe art and culture can be used as part of the transformation of life, society, and our everyday reality, not just a diversion from it.

True art and imagination can be used as part of the transformation of life, society, and our everyday reality, not a diversion from it. Art can be at its most inspired when it fosters awareness of the power each individual has to act for themselves, to make their own art, to believe in their own ideas, take control of their lives and change them.