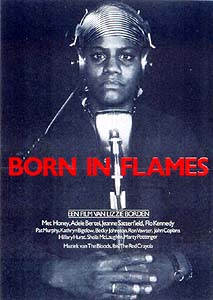 We are off to a friend’s house tonight for a screening of Lizzie Borden‘s “Born in Flames”, a 1983 film, about feminist activists 10 years after the United States has undergone a socialist revolution. We watched this the other day, but are up for another viewing already.

M forwarded me an article in The Independent film magazine, featuring an interview with the director which is definitely worth a read (linked to this article). It was particularly interesting to me in light of my recent thoughts about filmmaking. One of the reasons I started this blog was to help myself formulate my thoughts about my own film/video/art/activist practice, asking myself some fairly fundamental questions like “why make films?”. This question is particularly pertinent, given my ruminations in the last couple of months on the implausibility of a viable career in film/TV. As my friend Jean Poole asserted at Plug n Play the other night, independent filmmaking is “broken”. This came from an interview he was reading with one of the directors of Sundance, who mentioned that out of 2000 film submissions, the festival could screen 200, and out of these perhaps 20 would be picked up for a cinema release. Apologies if I am misquoting the math, and forgive me for the next batch of inaccurate arithmetic. Let’s say your chance of actually getting funding or finance to make your independent film is something like 1 in 100. Then if we calculate the chance, based on Sundance’s figures, of getting your film distributed is also 1 in 100. Let’s say then, for argument’s sake, your chances of making a film and getting it seen in the cinema are 1 in 10,000. These are really not great odds.

So if its so damn hard, why make films? The interview with Lizzie Borden highlights one of the really good reasons to do it anyway. Because film is transformative, not just for the audience, but for the filmmaker themselves. Lizzie Borden talks about finding her subject matter through reading the work of socialist and anarchist women writers, discussing how despite the fact that feminist ideas are often present in the intellectual vanguards of these movements, they are rarely incorporated into any actual revolution. She looked around her and saw how fractured the feminist scene was in New York City “Class and race really did divide people, and just a slightly different political stance divided middle-class women”. She looked at herself and asked “And how many black women did I know? None. And how many Latin women did I know?”.

She decided to begin the process of making a film, to bring different women together, into the film and into her life, making the film in a slow continuous process over five years, including substantial re-shooting and re-editing. The film wasn’t written as a finished script, and then produced over a year once some money had been found, it was made piece by piece, which allowed for a real evolution of the content over time. Various cast members lived in her house at different times, allowing for spontaneous shooting when the time and the ideas were right. Asked if she would do it again, she says “”if I had only made four films in my life and they were films that really changed me, I would”. Regarding the women who became part of her life, “The people I see every day at this point are different from the people I saw every day then… The most important things in life are the smallest: who you speak with every day.” Beyond this, the community around the film is transformed also, “It’s important to me when I see some of the relatives of the black women who were in the film liking the film because they wouldn’t normally  go to films like this”.

This is a fascinating departure from the ordinary process of filmmaking, which does open up the possibility for a filmmaker’s subject to feed into her life, and feedback into the film again, transforming the self and the film at the same time. The creative process, as much as the result, is a major motivating factor for most artists, which the unusual process for “Born in Flames” highlights (somewhat akin to community cultural development processes). This film is an antidote to the inevitable sense of futility that I, and many filmmakers, feel in response to such a hostile environment for our work to be supported, and seen.